Our Wildlife Hospital is working with Wildcare Inc and  wildlife carers to ensure a successfully rehabilitation program.

Last year we supported a Flying fox carer with her application for the Australian Bat Society Grant. She applied for night vision cameras to monitor the rehabilitation process but also to produce short educational videos for bat carers and special interest groups.

With the wonderful support via an ABS grant I was able to replace my old bat cameras with a wireless night vision 4 channel camera system to allow us to monitor and record the activities of our in-care rehab FFs and free-flying visitors.  Thank you ABS! 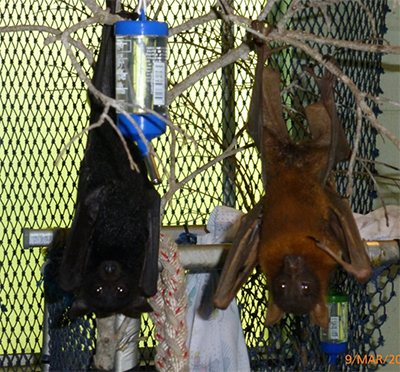 It was a quite a challenge to find the system we wanted as there are many different types, some battery operated (which are expensive as the batteries have to be continually replaced), some mains powered, some wired and some wireless.

We also had to negate the “Faraday Cage Effect” (stopping or degrading the signal from the cameras back to the Visual Display Unit) and find a way to bat and weather proof the separate components.

We eventually settled on a TECHview, 2.4 GHZ Wireless Surveillance System.  This system has:

This system also allows for simultaneous viewing and recording with the added advantage of supporting up to 4 Cameras.  The main components being the display screen and 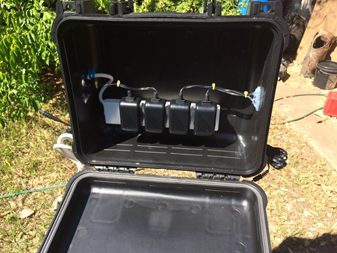 a single camera, with the 3 extra cameras purchased separately.

We had to ensure that the mains power was waterproofed against our tropical wet season so Scott bought this waterproof box which he adapted for the power box.  The “ToolPRO” waterproof box fitted with a back board, added power board, drilled holes and liberally sealed all wires into and out of the box with silicon sealer.

The finished product waterproofed and set up with the power adapters that the cameras are powered by.  Note that the hinges are at the top when it is in place on the outside of the Rehab Flappery.

We also had to bat proof the two inside and two outside cameras as previous experience has taught us that FFs love to swing off, lick and bite the lenses, pull off the aerials and generally play with cameras and anything that is not protected from prying fingers, toes and mouths.

We tried enclosing the cameras in Systema Cracker Containers with removable lids held in place with cable ties around the latches of the lids to make sure the FF curiosity was overcome by human ingenuity.

Unfortunately, whilst the lids/covers worked during the daylight with only a very slight haze to the picture, at night the covers reflected the infrared so much that all you got on the display screen was circle of little lights showing on each camera reflected off the cover and you couldn’t see anything else.

We removed the covers and just have to regularly wipe the lenses to remove excess saliva!  Yup the FF love those little circles of red lights and regularly lick, preen and show off in front of them.

We ended up with two separate methods, the first being mounted on a back boa

rd with the ariels and power wiring coming through the back board so that when mounted inside the flappery the ariels and wires are able to be outside the wire of the cage to overcome the effect that the wire cages cause to a wireless signal.

Two of the cameras were set up this way, one for the middle of the flappery and one for an end corner to get maximum coverage of FF activity.

The second method was to do the same with the two outside cameras but using the mounts that came with cameras and a brick but still with the Systema Cracker containers as the main method to cope with FF curiosity.

The system allows for you to split the vision between all 4 cameras at once and record all at once or select a single camera and just record that, all done on a handy little remote.

The aim of having the cameras is to record the behaviour of in-care FFs and to show fellow and prospective carers the practices that have worked for me in Darwin to successfully rehab and release FFs. Video’s will later be made available on the ArkAid (and ABS if wanted) website and can be used freely to support FF introduction and caring training/workshops that ArkAid provide to the public and carers.

Some particularly important behaviours I would like to capture are:

Rope for climbing, flapping and movement through enclosure – Landing pad at long end.

ArkAid Inc. is the first Wildlife Hospital in the Northern Territory.
We provide free first class medical and surgical veterinary treatment for native wildlife in the Greater Darwin area.